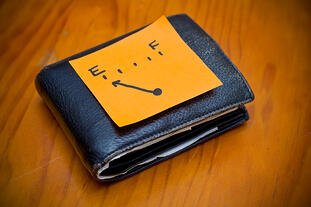 I’ve been asked the same question time and time again when I'm in the field talking about self-pay collections and bad debt - what question you ask? I'll get there. Collecting invoices from a stubborn or intentionally uncooperative patient for medical services can be enough of a problem, but when the patient seems to have “no money whatsoever” to pay the bill many hospitals and clinics immediately assume the case has to be written off as a loss. That's far from true, but unfortunately it seems like the only logical choice due to a lack of awareness (or wanting to keep the patient from filing a complaint!). In reality, there are a number of ways collections can be made if done in a smart, persistent fashion. There are some accounts that will take a while to get paid, but persistence does often pay off in the end (trust me, I KNOW persistence!) Finally, the question I get asked...

So how do you get a patient to pay who doesn't have money?

Human beings generally don't like to feel guilty about something (you know you feel bad minutes after you yell at your 4 year old for spilling juice everywhere or guilty after you eat 6 cookies instead of stopping after 3). It bugs at them and eventually their mind wants some kind of resolution to make the guilty feeling go away. Take confession for example – it’s a powerful ceremony in some religions, and also the reason why people eventually just give themselves up after doing something very wrong.

With uncollectable medical cases, a patient who has no money immediately available doesn't mean the person should be left alone and forgiven the cost. Consistent reminders, billing letters and phone calls can do quite a bit in convincing a person to pay their bill when they have the means to do so. A surprising majority will eventually try to close the issue with a late payment due to feeling a twinge of guilt. In the meantime, the effort and cost expended with regular communication attempts are relatively cheap - the cost of a letter or a local phone call in most cases.

Early out or collection agencies essentially take over the communication role, leaving a hospital or clinic to put its attention back to business.

Smart healthcare providers or their agencies remind patients of their potential ability to borrow to pay their bills due immediately. By making information available how to obtain loans or the types of financing accepted, medical offices can realize an increase in invoices being paid very quickly. People just need to be reminded that these tools exist.

Advising finance can be a bit tricky; no one wants to be accused of pressuring a patient into some kind of predatory lending scheme. However, if a patient already has access to such tools or can get access, there's no reason why he or she shouldn't be convinced to use them to pay outstanding costs for medical service.

For a hospital or any party to exercise a collection over a long period of time, the debt needs to be established in court. Otherwise, under general contract law, a medical business only has three years in most states to exercise and enforce a contract for services rendered. After that, the medical loses the power of collection.

When confirmed in court, however, the party confirms the right to legally collect on a bill up to 20 something years later. So even if a person doesn't have money right now, it doesn't mean the patient is automatically off the hook. Waiting a few years can find the same person with a changed situation and the ability to pay the outstanding bill. The accounts receivable just has to be treated like a long-term debt owed versus a short term cash issue.

Garnishments are another legal tool available. Once the court has confirmed a debt is owed, the hospital (or agency) can wait until there's evidence that the patient is working. When that occurs, a motion for garnishment can be made, which then allows the hospital to seize a portion of the person's paycheck. The same general process can be used with a property lien, forcing people to give up value when their property gets sold. Again, however, both take time to implement and see them come to fruition. So offices pursuing patient debts need to be patient and disciplined.

Collecting invoices from a patient who seems like he or she can't pay a medical bill is possible, so offices should not be so quick to write off these accounts as lost. They do take patience, however, and persistence. So if outsourcing, a hospital should make sure the vendor doing the collection work is professional in practice and persistent. After all, every action does have a reaction; a hospital should always think about how its collection efforts play out in the big picture of a community. 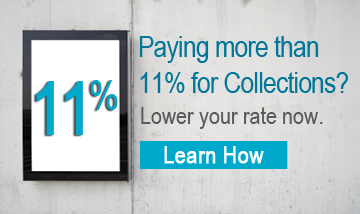